Cristiano Ronaldo is expected to start when Al-Nassr take on Al-Ittihad in the Saudi Super Cup semifinals on Thursday (January 26) at the King Fahd International Stadium in Riyadh.

Ronaldo finally made his much awaited debut for his new club against Ettifaq in the Saudi Pro League on Sunday (January 22). The five-time Ballon d’Or winner did not manage to get on the scoresheet in his debut match. Rudi Garcia’s side, however, did pick up a narrow 1-0 win in the league thanks to a goal scored by Anderson Talisca.

Cristiano Ronaldo had a decent debut game in the Saudi Pro League against Ettifaq last time around. The forward did not score but took four shots in the game of which one was on target. According to Sofascore, Ronaldo also contributed two key passes and had a passing accuracy of 89 percent.

Cristiano Ronaldo played the full 90 minutes against Ettifaq. The forward, however, should be in line to start and lead the attack against Al-Ittihad in the Saudi Super Cup. The former Manchester United striker could be partnered alongside Talisca in attack for Al-Nassr.

The Saudi Super Cup is back in action with another set of matches this week as Al Ittihad take on Cristiano Ronaldo and Al Nassr in an important semi-final fixture at the King Fahd International Stadi dlvr.it/ShNcvJ

The Saudi Super Cup is back in action with another set of matches this week as Al Ittihad take on Cristiano Ronaldo and Al Nassr in an important semi-final fixture at the King Fahd International Stadi dlvr.it/ShNcvJ

Al-Nassr and Al-Ittihad have already faced one another in the Saudi Pro League earlier this season. The game at Mrsool Park ended in a tense 0-0 draw. The match saw two red cards and six yellow cards in total.

It is worth mentioning that Al-Nassr have been quite successful in the Saudi Super Cup previously. The Riyadh-based side have previously won the trophy on two separate occasions, in 2019 and 2020. However, with Cristiano Ronaldo in their ranks, they are expected to win their third title in the coming days.

Ronaldo could very well be lifting his first major trophy in Saudi Arabia in the coming days. A win against Al-Ittihad would see Al-Nassr get into the Saudi Super Cup final, which is scheduled to take place on Sunday (January 29). The other semifinal, meanwhile, will be contested between Al Feiha and Al-Hilal.

Rudi Garcia’s side are also currently at the top of the standings, having picked up 34 points from 14 matches. They are a point ahead of second-placed Al-Hilal and have a game in hand over their rivals.

Cristiano Ronaldo has won a trophy with every club he has played for and the superstar forward will therefore want to continue with that trend in Saudi Arabia as well. 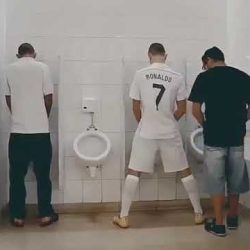 Cristiano Ronaldo ‘to return to Europe before retiring’